Chris is an energetic, dynamic dancer who loves jamming to fast music. After first becoming interested in social dancing as a freshman through dorm peer pressure, Chris has been swinging the f out since joining Swingtime, Stanford’s energized swing dance troupe, in 2009. Since then, he has been a performer, a choreographer (self plug: Rhythm of Love and Dance With Me Tonight for Swingtime), and an instructor. As a hopeful future teacher, Chris strives to instill a passion for Lindy Hop, an excitement for the music, and a curiosity and awe about swing theory along side steps. Chris is addicted to Lindy Hop and Charleston, and occasionally tries his hand (foot?) at Balboa, Shag, and West Coast Swing, Waltz, Polka, and some Latin dances. Outside of swing dancing, Chris is currently a graduate student at Princeton in Chemical Engineering, and also enjoys, cooking, eating, musing about pedagogy, and jamming on the washboard in the Bitters & Rye Jazz Band. 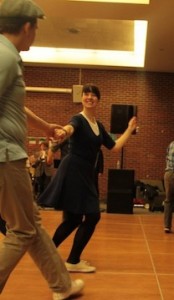 Natasha started dancing when she was 5 years old and has been practicing dance in various forms from classical ballet to folk dances ever since. Her interest in Swing Dancing comes from her love of jazz music, and the history and culture of Lindy Hop, its friendliness and openness. She took her first swing dancing lessons in St. Petersburg, Russia, and continued learning the dance at NYU, and in different dance studios of New York City. One of her favorite swing dancers, Samantha L Lawton once said: “I love dancing because it’s the body’s natural way of celebrating being alive.” Natasha couldn’t agree more! 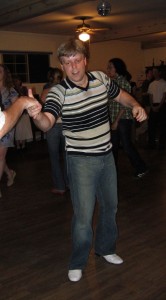 Rob and Swing Dancing fell in love at first sight during the Swing Resurgence back in October ’98. Originally inspired by the infamous Gap Commercial, he’s been teaching East Coast, Lindy Hop, Balboa (his favorite), and a little Charleston since circa 2002. Member of the first swing dance troupe “New Mexico Swing Fix”, 3 time performer in the annual Swingin’ Suites show by Moving People Dance (among other shows), founder of Swing Buffalo, the Queen City Swing dance troupe, and numerous workshops (including Rhythm Shuffle), choreographer, and frequent DJ, Rob has definitely made swing dancing central in his life. While Rob hasn’t competed very much, he has attended countless workshops all over the country (and in the ocean) since 2001, spending way too much money pursuing his passion. Rob loves teaching and wishes everyone could know the joy that comes from swing dancing.

Grittney was literally dragged to her first swing dance lesson as a freshman at Penn State. However, she soon realized how much fun it could be and quickly become a swing dance addict. Since then, she has traveled all along the eastern seaboard to social dance and attend workshops. She has also been dancing in other countries. She loves to dance lindy hop, charleston, balboa, blues, and tries to be good at collegiate shag. She loves the energy that swing music provides, and most of all she wants her students to have fun. When she isn’t dancing, she can be found buried in a book, eating, sleeping, or trying to be a dinosaur. 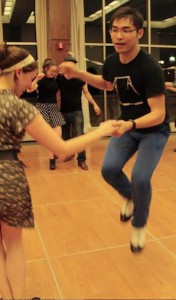 Kevin was introduced to swing dance completely by chance, and had his beginnings with Swing Ann Arbor. He had always loved big band music and had no idea that the jazz and swing dances survived to the modern day. Since his first 6-count Lindy Hop lesson, he hasn’t looked back, as swing dancing and Lindy Hop have brought so much happiness into his life. He enjoys Lindy Hop, Balboa, Charleston, and will attempt to do both Collegiate and St. Louis Shag, on occasion. He strives to share the joy of swing as much as he can, and is always seen and heard laughing on the dance floor. He has won several local and regional Jack & Jill Competitions, as well as placing first at the Boston Tea Party Swings. Kevin secretly hopes that world peace can be achieved through Lindy Hop. On those very rare occasions when he’s not dancing, Kevin enjoys card games, cocktails, and cooking. 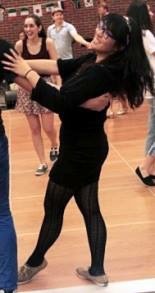 Vicki originally dabbled in and out of swing dancing socials as a way to destress at The College of New Jersey, but soon after she met a few friends passionate about the art of swing, she found herself traveling at least three times a week to socials and classes for any opportunities to fuel her passion for swing and jazz. On the dance floor, she strives to accommodate the unique styles of every dancer comfortably and energetically, and encourages her partners to express their creativity. Vicki thrives off of Lindy Hop, Charleston, and Balboa. Sometimes, she tries (and miserably fails) at West Coast Swing for fun. On the rare occasion when Vicki isn’t dancing, you can find her doing Pilates, working as a graduate assistant, catching up on television shows, or cuddling with her fat shih-tzu Pico.

Princeton Swing Club former instructors, for a taste of history… 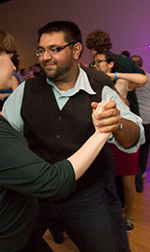 Shoham got started swing dancing as a junior at UPenn, all because of a fateful sandwich. The rest is history. He’s been hooked ever since, with a focus on having (and giving) the most fun social dances known to humankind. He’s studied Lindy Hop, Charleston, Balboa, and Blues at events and workshops around the world, and occasionally pretends to do West Coast Swing. As an instructor, he focuses on clear communication between partners, while employing rhythm variations and a grounded style. When he isn’t swing dancing (ha), you can find him rocking out with Sho and the Sho-Timers or Shuffle Mode, DJing, or slaving away in a lab doing research on batteries.

Hong first started swing dancing at LaB (Lindy and Blues) in Philadelphia after hearing her office mate rave about the dance. What Hong thought would be a small hobby quickly turned into classes and social dancing at least two nights a week, traveling to workshops 3+ hours away for the weekends, and even squeezing in attending social dances while on vacation. She’s even taken first place in a regional J&J at the Lindustrial Revolution! She loves jazz music, the energy of the dance floor, and sharing the love of dancing with others. Be sure to ask her to dance, she’ll be the one with the big smile at the end of every swingout! When Hong isn’t talking about dancing, she probably chats it up about science, running, and food.